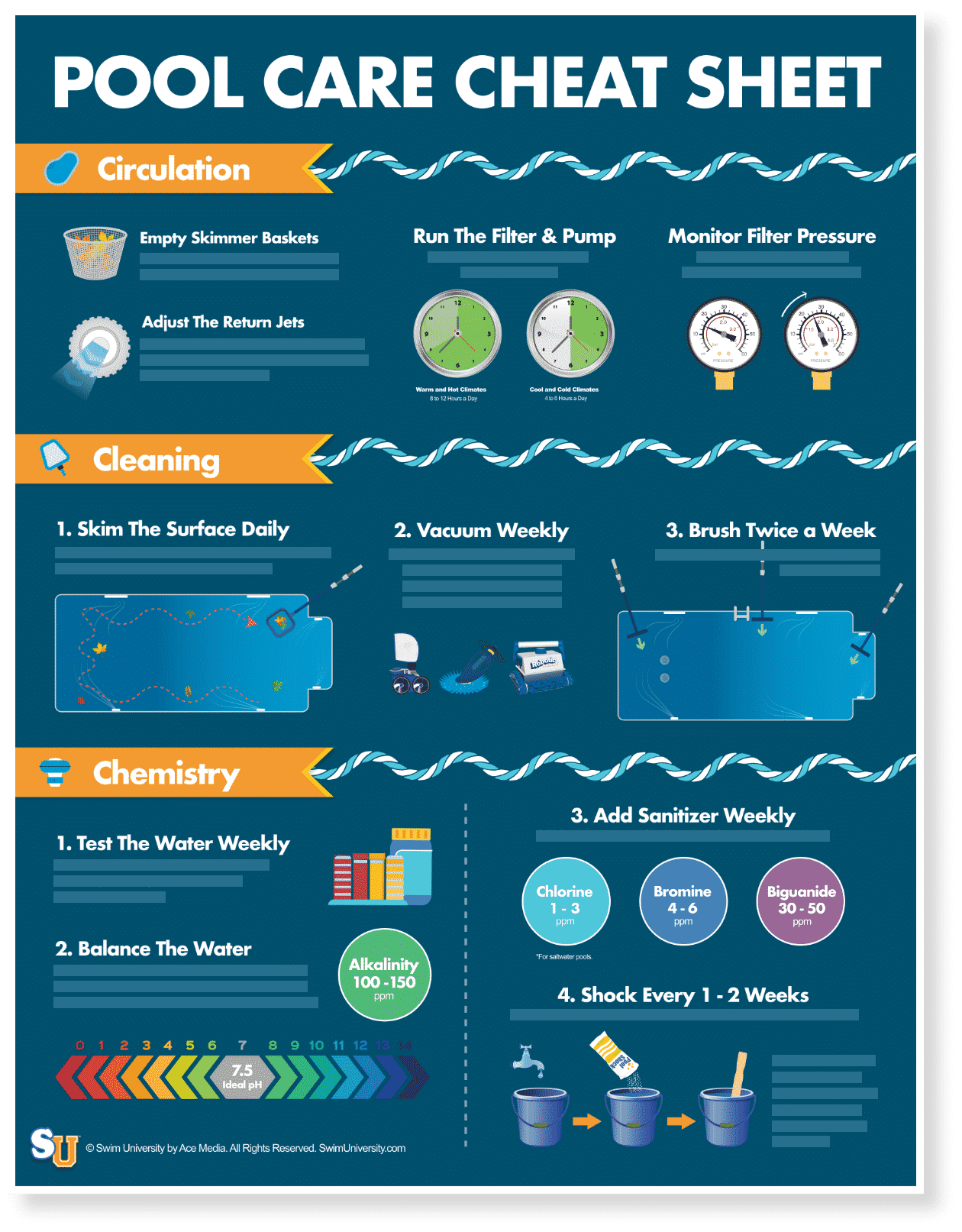 The Complete Guide to Pool Ionizers

What if we told you, you could sanitize your pool with an electrical device and reduce the amount of chlorine you use by about 85 percent? You’d say, “Um, I don’t want to put anything electrical in my pool!” Relax. A pool ionizer remains outside the pool, kills bacteria, and helps prevent algae.

How? Science! It’s all about cations and anions, protons and electrons. Are you wishing you’d paid more attention in science class? Don’t worry. You don’t need to be a professor to get clean pool water with an ionizer.

What Does a Pool Ionizer Do?

It’s an alternative way to sanitize a swimming pool using mineral ions—specifically, copper and silver—instead of chemicals such as chlorine or bromine alone. A pool ionizer can be helpful for those who are sensitive to, or who just want to keep their pool clean with smaller amounts of harsh chemicals.

What is a Pool Ionizer?

To answer that question, first we need to answer another question: What is an ion? Get ready for some science!

Ancient Romans discovered that silver has bactericidal (bacteria killing) properties, and it’s well known that copper can inhibit algae growth. In fact, the active ingredient in many algaecides (algae killers) and algaestats (algae preventers) is copper. More specifically, copper and silver ions are what perform these tasks.

Which is where the pool ionizer comes in. It’s a device that uses electricity to produce these metal ions to clean and sanitize pool water. Of course, the process is slightly more complicated.

Important: If there’s already algae in your pool, an ionizer isn’t going to get rid of it. You need to get rid of the pool algae first, then install the ionizer to help keep it from coming back.

How Does a Pool Ionizer Work?

Water moves out of the pool into the suction line, and then through the pump, filter, and heater, if you have one. Next stop is the ionizer to sanitize the water before it reenters the pool through the return jets. 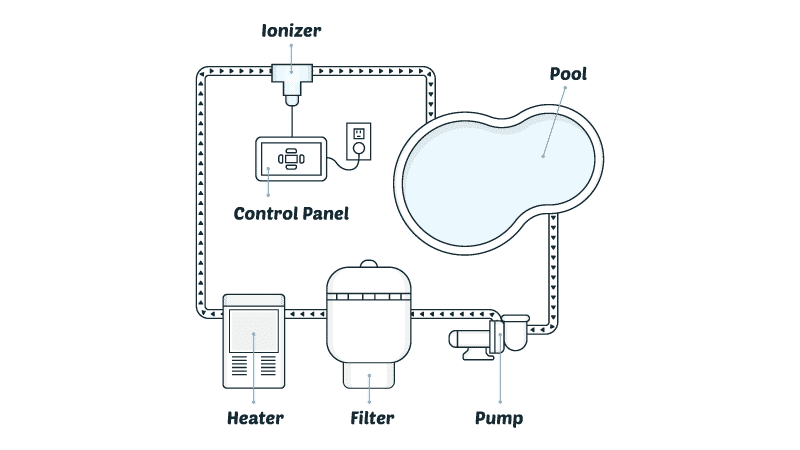 The ionizer contains electrodes made of copper and/or silver, which are placed next to each other where the water exits the ionizer and enters the return pipe. The device uses low-voltage DC current to energize those electrodes, activating their sanitizing properties.

This happens because the electrical current causes the copper and silver atoms to lose one electron each, thereby turning the atoms into cations, which are positively charged ions because they contain more protons than electrons.

The cations are then carried into the pool by the water rushing through the ionizer. They float in the pool water until they encounter a microorganism with negatively charged ions, or , so called because they contain more electrons than protons.

The cations attach themselves to the anionic microorganism—bacteria, for example—and erode the organism’s cell wall, thereby destroying it.

It’s important to note, though, that a pool ionizer isn’t enough to fully sanitize a pool on its own. You must supplement with another sanitizer. Main Access Power Ionizer Swimming Pool Water Sanitizer System
Reduces chlorine usage by using copper and silver ions to sanitize and kill algae with no odors, skin irritation or faded swimsuits. Sanitizes pools up to 40,000 gallons.
Buy Now
If you click this link and make a purchase, we earn a commission at no additional cost to you.

Giving Your Ionizer a Sanitizing Boost

While pool ionizers do fight organic matter like algae, they’re not the best oxidizers, so they’re not completely effective on their own. To get full sanitization, you’ll need to supplement your pool ionizer with chlorine. You can use either liquid chlorine or tablets, whichever you prefer. Stock up and save money on chlorine tablets for the season by getting the standard 3-inch stabilized chlorine pucks.

The good news is, because a pool ionizer does reduce the amount of contaminants in your pool, you won’t need nearly as much chlorine as you would if it were the only sanitizer. Rather than the standard 1 part per million (ppm) to 3 ppm, if you’re using a pool ionizer, the chlorine level only needs to be somewhere between 0.5 ppm and 1 ppm. 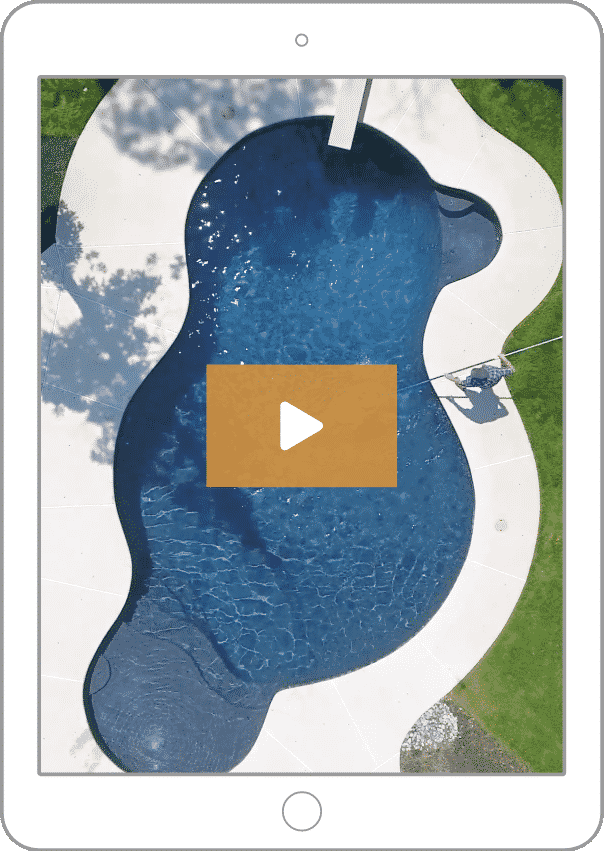 You may see some advice out there that says you don’t have to supplement with chlorine on an ongoing basis, and that you can rely solely on your ionizer if you just use chlorine shock weekly.

While we’re big advocates for using pool shock on a regular basis to keep the water clean and sanitary, we don’t agree with this advice. When it comes to eradicating viruses and bacteria—which equates to keeping you and your family safe from illness—and preventing algae from getting a foothold in your pool, you can’t do better than keeping your water chlorinated to some degree. Use the entire contents of the bag when opened. If any granules settle to the bottom of the pool use brush to disperse them. Add the right dosage of this product during evening hours while the filter pump is running.

Buy Now On Amazon Buy on InTheSwim.com
If you click this link and make a purchase, we earn a commission at no additional cost to you.

What’s the Difference Between a Pool Ionizer and a Mineral System?

Simple. An ionizer uses electricity to create the ions, while a pool mineral system relies on cartridges pre-filled with eroded copper and silver ions.

Thinking about switching to a pool ionizer? You have a few really good reasons.

You know how you kind of feel like a dried prune when you get out of a chlorine pool? Dry, itchy skin, and stiff, possibly green hair. And depending on whether the chemical levels are correct, your eyes may feel like they’re on fire.

Ionizer-sanitized water is silky soft. It’s gentle on your hair and skin, and shouldn’t irritate your eyes as long as, again, the chemical levels are correct.

That harshness your body feels as a result of chlorine? Your pool equipment feels it too. Even though that equipment is made to withstand being exposed to chlorinated water on a daily basis, it will begin to show signs of wear after a while.

Because the water is softer with a pool ionizer, the equipment won’t show the effects of harsh chlorine exposure. If it’s not beaten up by chlorine, it can last longer, which can also save you money in the long run.

Remember, a pool ionizer still needs some chlorine to supplement its sanitizing power. But not nearly as much as you need if you’re using chlorine alone to sanitize your pool. This also means a lower possibility of chloramines being produced, and less money spent on the chemical.

Sure, you don’t want to eat lumps of copper or silver. But the metal ions produced by the pool ionizer contain such low levels of the metal that they’re not harmful to anyone, even if someone accidentally swallows pool water. We can’t promise it’ll taste very good, though.

We don’t think there’s anything that would warrant not using an ionizer at all. You’ll just need to be aware of a few things.

Which means you still need to spend money on a sanitizer in addition to the ionizer. But if you want to keep bacteria and algae out of your pool, it’s absolutely necessary.

You May Spend More Money

Once you buy an ionizer, that’s it. There are no cartridges to add, no supplies to keep up with. But because you need to supplement with chlorine—and make sure you’re shocking often enough—it’s possible you’ll spend more money.

But really, the only way we see this happening is if you have an enormous pool, you have tons of people in it all the time, or you’re lax about managing the pool chemistry.

Your Pool May Be Stained

Because a pool ionizer uses copper and silver, it does have the potential to stain your pool’s surfaces when the metals oxidize in the water. Copper can leave greenish stains on pool surfaces, while silver can react with sunlight or shocking, and leave black stains on a plaster pool interior.

You can prevent this by using a metal sequestrant to keep oxidized metals from settling on your pool’s surfaces, and allow them to be filtered out of the water.

Aside from the electrical ionizers you can install in your pool circulation system, you’ll also find solar pool ionizers available. They’re free-floating sanitizers that use a copper anode attached to a small basket that is then attached to the device. That part remains submerged.

The top of the solar pool ionizer is covered in small solar panels. The ionizer uses the sunlight in place of electricity to generate the ions to sanitize the water. 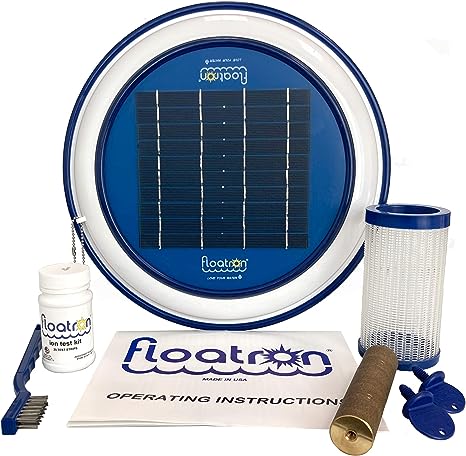 A Solar-Powered Ionize will prevent algae and reduce the amount of chlorine and chemicals up to 85%. Covers up to 35,000-gallon pools.

Buy Now
If you click this link and make a purchase, we earn a commission at no additional cost to you.

Solar ionizers are much less expensive than electric ones. But here’s the thing. Just like anything that runs on solar power, it’s not going to run as well—if at all—on cloudy days. Or at night.

The logical conclusion is that it may not provide as much sanitizing power as an electric pool ionizer. Our recommendation would be to stick with an electric option so you know it’s working at all times to keep your pool water clean.

Balancing Water Chemistry with an Ionizer

In addition to keeping the chlorine level lower when using a pool ionizer, the other chemical levels are a bit different.

Note: If you have hard water where you live, or the calcium hardness in your pool hovers around the higher end of the recommended range, you may need to remove calcium deposits from the pool ionizer’s electrodes from time to time. A simple but effective liquid test kit for chlorine pools and hot tubs.

Sanitize Your Pool with Atoms!

If you want to use fewer and smaller amounts of chemicals in your pool, whether you’re looking for a gentler swimming experience, or you’re sensitive to harsh chemicals like chlorine, a pool ionizer is definitely a viable option. 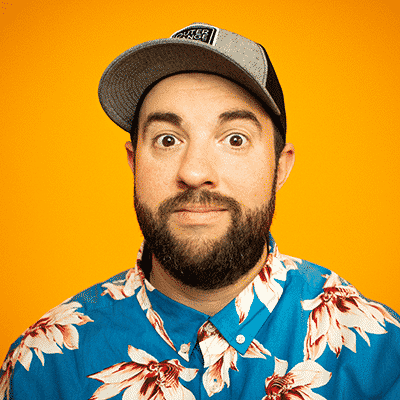 Matt Giovanisci is the founder of Swim University® and has been in the pool and spa industry since 1995. Since then, his mission is to make pool and hot tub care easy for everyone. And each year, he continues to help more people with water chemistry, cleaning, and troubleshooting.
A Cheat Sheet For Perfectly Balanced Pool Water and Crystal Clear Swimming
Download this FREE printable cheat sheet to keep your pool clean and clear without any fuss. You’ll never worry about your pool again with this easy-to-use guide.
Click Here For The FREE Cheat Sheet